I was fortunate enough to be listed twice in the credits of "Guess Who's Coming to State Dinner", which aired a couple of weeks ago. I worked as a designer on the show, creating new characters and props, which is what I did for the whole season. After I finished up my design position in early January '06, I got a few calls in the months afterwards to pick up some additional freelance work on the show, which was usually design work that had fallen through the cracks. As it turned out, I was also asked to help out on storyboard revisions for a couple of episodes. The following are 'board revisions for "Guess Who's Coming to State Dinner".

Board Revisions are generally what you might guess they are, mainly additional work putting the characters on model (like the above pages that feature Dean Venture), or sometimes completely redrawing scene angles, etc. (examples shown below), based on those little thumbnail, post-it note fixes that I keep mentioning Mr. Publick would constantly churn out (in addition to writing, designing, and voice acting for the show, along with a million other things not mentioned here). All my work that you see here is done in a thick black ink line on top of the work that the board artist did.

I think these next pages of boards were cut out of the final production.

Posted by Matthew I. Jenkins at 3:30 PM No comments:

I've written a pilot and am now onto the second script. I'd love to hear from you to see what you think. If you'd like to see more about this would-be adult swim project, please visit summercampofdeath.com. There you can find more movies, sketchbook drawings, and free stickers! So what do you think? Could you sit through 15 minutes of this?
Posted by Matthew I. Jenkins at 4:45 PM No comments: 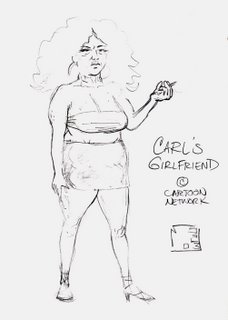 For some reason I did have enough time to put in a considerable amount of work on the animation of this three-quarter run cycle scene. I must have felt the sincere need to portray this fifty year old, would-be girlfriend of Carl running in the funniest way possible, as some sort of icing on the cake of any ATHF animation I was doing at the time. This sort of thing was a real rarety on the show. Probably that and also a mixture of not having anything better to do. At this point in the story, she's running away in terror as the first to witness Carl's hideous mutation into a host for a clown-demon from another dimension, I think...
Posted by Matthew I. Jenkins at 9:59 PM No comments:

One of my Favorite Scenes

Here's one of my favorite scenes that Charles Zoubek, one of Atlanta's talented animators, and yours truly created sometime around the month of September of 2003.

This is what I call a final pencil test. This was always the last step in the production to check everything, making sure the layers fit perfectly, the mouths fit perfectly, the color, etc. Then we would ship it over to Cartoon Network to be composited into the finished scene.
Posted by Matthew I. Jenkins at 12:36 AM No comments: