I Love The Venture Brothers

Even though I've signed on to help design characters and props for the VB season 3 design department, I also wanted to try out for the storyboard department. They decided to humor me and give me a storyboard test.

It's kicking my ass.

But after a long weekend and several late nights, I think I'm starting to get warmed up... 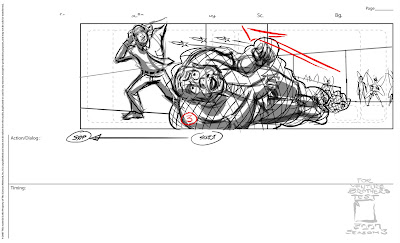 I officially accepted the design position on The Venture Brothers season three and four today! Life is good.
Posted by Matthew I. Jenkins at 11:36 PM 6 comments:

This is a sort of re-post from my YouTube channel. I'm really just waiting around for the ATHF:movie to come out so I can post a bunch of design drawings from when I worked on the damn thing, oh, in 2004/2005. Is that right? Yes it's been that long in development. Anyway, here's what this post is really about:

"Years ago, when adult swim launched, they had replaced the network packaging of old people swimming in pools with some cool art that looked like airplane safety instructions. This is part of our pitch to Cartoon Network, to get the account. It was well received but eventually we did not get the account, but it's interesting to see this years later..."

When I say "our" above I'm speaking of a company I was part owner of called Wild Hare Studios. You'll see that name in a lot of old ATHF episodes and Brak Show episodes. The company that DID get the account was Big Deal Cartoons owned by none other than C. Martin Croker. Maybe if you bug him he'll post some of that stuff on his adult swimmin' blog. Too bad they replaced all that stuff only four months later with the white text on solid black. I have to say though, after all these years, the white text on black has grown on me.
Posted by Matthew I. Jenkins at 4:29 PM 1 comment: