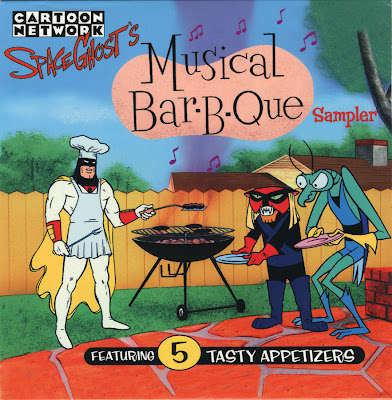 There were at least two musical CD's put out by Cartoon Network of various songs and skits performed by the SGC2C cast. The art for the first, Musical Bar-B-Que -released in 1997, is one of my oldest SG related portfolio pieces. At this time I was still quite the novice, having been in the animation field for only 2 years. Of course I was very proud to work on this as an assistant to C. Martin Croker over at his Big Deal Cartoons. In addition to his hilarious singing and character performances on the album, Clay created all the art work you see on both sides of the CD, including the beautifully painted background, with a small amount of help from me, and I believe the talented Stephanie Gladden, and perhaps Robert Pope (though I don't know for sure)** who helped out on the characters. I am hoping he does a more worthy post on this art, along with the second CD, "Surf and Turf", where it should really go, Clay's Adult Swimmin'. Especially since I can't find the large sized, full-color xerox that I kept for years and years and years, and right when I need it... can't find it. 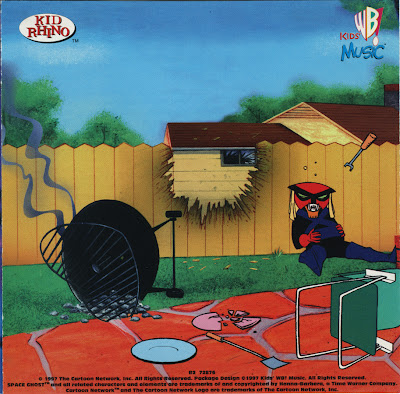 My main reason for this post is to show what I remember as my main contribution to this CD's art, Brak and the props on the back cover. Work on an illustration like this would generally have the same approach as animation work. Being an assistant, I would rough out a pose on animation paper, like this passed out pose of Brak, give it my best shot over the course of the evening shift, and pass it off to be tightened up, fixed, changed, and put on model. My goal as an assistant would be to see how much of my contribution didn't need changing, because if not then you're holding your own and giving your director something he can use. I think I did OK on my effort here, and some of it made it through the process. And whenever that happened in any production then, it was a really great feeling. It's sort of taken for granted now in animation that you could be working on a character you loved when you were a kid, but at the time it was rare. Especially rare in Atlanta, GA in 1997. It was a great feeling to be working on a character you loved at all, let alone a show.

Sadly, I can't find any sketches or roughs from this time.

**I used the Sampler CD originally for this post, but I dug out my copy of Musical Bar-B-Que, and noticed my name in the Thanks To section, which was cool because I had forgotten. Didn't see Steph or Robert's names, so I crossed through the above.
Posted by Matthew I. Jenkins at 4:20 PM 3 comments: