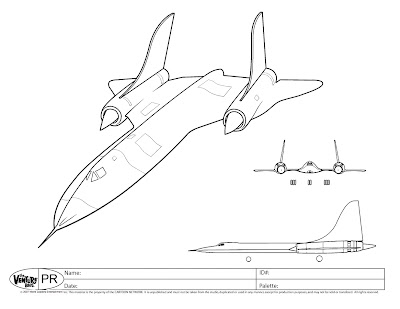 Here's a jet I drew based off of the Blackbird. When doing these, I was inspired by those old Jonny Quest model sheets like THIS ONE, especially since we were encouraged to do so. I don't think I come close to some of the excellent draftsmanship seen in some of those model sheets, especially the Doug Wildey designs, but they are inspiring nonetheless. Maybe if I xeroxed this design a hundred times and then posted it, it'd have that quality that I covet so much. Just kidding. I consider myself a cartoonist, but those old greats like him were real illustrators. By the way, I really took advantage of some great reference on the web during my stint on VB season 3. If you're looking for old Jonny Quest art, GO HERE.
Posted by Matthew I. Jenkins at 9:46 PM 1 comment: 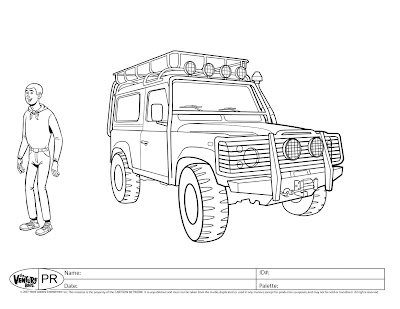 OK. So, here's a great example of what I was talkin' about in my previous post. This is a Land Rover I "drew" for season 3. I'm pretty happy with it except for the lack of detail in the hubcap area.
Posted by Matthew I. Jenkins at 1:19 AM 1 comment:

Haircuts Are For Sissies 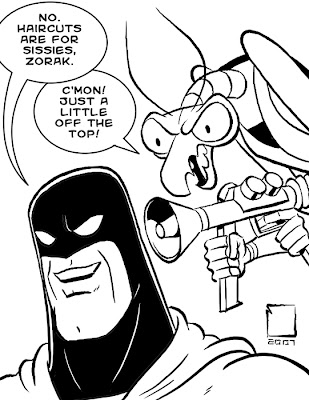 And they ARE too!

Found this rough sketch the other day and decided to do a quick inking over it.

I finally finished my 6 months on the Venture Brothers as character and prop designer. Don't think I'll have much to show until the episodes start to air, which will be a little longer I guess. Maybe I'll shoot an email over to JP3, and see if he minds if I show you a sneak peak. The season was lots of fun and ran very smoothly this year. As usual, it was great to work with such talented people and especially loved working with Stephen. I got a nickname this season, "The Car Guy", which means, you guessed it, I got stuck with a LOT of the cars (and jets, and zeppelins, and motorcycles, and...). This was something that started last season. The designation would be a lot cooler except for the fact that I really just find a photo at the right angle and trace it in Photoshop. So, I guess that means I'm the best tracer of cars, mainly cuz I'm quick with the vector tools, which makes for the best ink style of anything manufactured. I did have fun redesigning the X-1 and also updating Brock's Charger. It's especially funny to me because I've always hated drawing cars and always felt I was terrible at it. But because I love VB I just took my time and through patience would generally end up with something I liked. Anyway, I'll post some designs as soon as I can!
Posted by Matthew I. Jenkins at 2:50 PM 1 comment: